String pedagogy tends to lump all extensions into one large animal. As cellists know however, not all extensions are created equal but rather are divided into two completely different categories of forward and backward extensions. Let us explore the similarities and differences below. 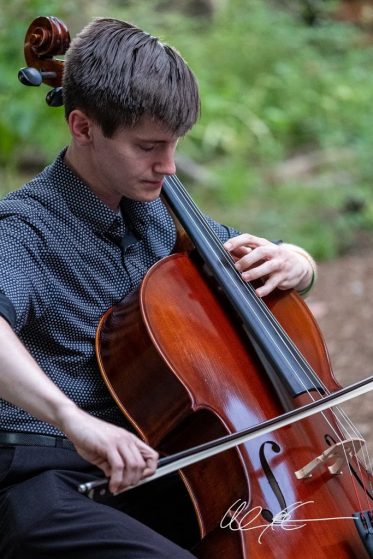 To begin, we need to set two ground rules.

#1. Extensions always occur between first and second fingers in the neck positions.

Once we understand this concept, extensions become more manageable. All the fingers remain half-steps apart from adjacent fingers with the exception of the first finger that will be a whole-step away from second finger. No need to worry about your short pinky not reaching forward far enough on its own. Rather allow the movement of the second finger to push the other fingers into position.

#2. The thumb remains under the second finger at all times.

This rule is fairly self-explanatory. No matter whether we shift or extend, the second finger and thumb move as a unit in the neck positions. We will flesh this rule out practically later in the post. Now on to the two types of extensions.

Although nearly all orchestral string method books begin with the forward extension, we will begin with the backward extension instead because it is easier both to explain and to perform. This might raise the question of why the method books teach the harder concept first. My personal opinion is that many orchestral method books are designed with the upper strings in mind and subsequently are adapted to fit cello and bass. Many other factors in addition to extensions lead me to this conclusion.

Enough of the rant. Let us continue.

The backward extension is simply the action of straightening the first finger to reach a half step lower, what Wesley Baldwin of the University of Tennessee, Knoxville calls the “waiter, check please!” position.

Of course, much more goes into the process than that. At least two things could happen instead of an extension forming. First, you might straighten your first finger, and instead of reaching an extension, the finger points straight into the air (fig. 1).

If you experience this phenomenon, all you need to do is angle your hand back so that the finger touches the string (fig. 2).

Perhaps you straighten your first finger only to find that it is touching a lower string (fig. 3).

In this case, all that needs adjusting is your elbow. Simply move your elbow forward until you find the correct angle to reach the desired string.

One thing you will notice about this hand position is that it is sustainable. Instead of the fingers spreading left and right across the palm (fig. 4), the movement is the common motion of opening or closing the fingers.

If your hand is like mine, you may notice that, in addition to being easier on the hand, the distance between the first and fourth fingers is equal to or greater than spreading across, allowing us to reach larger intervals.

You can tell the backward extension is being executed correctly when only one finger moves. Notice also that the wrist does not move, but that the uninterrupted straight line from the elbow to the base joint of the pinky remains unbroken (fig. 5).

The first of these common errors is extending forward from the wrist. The resulting position breaks the previously mentioned line from elbow to pinky. A negative example looks like this (fig. 6).

From this position, students often complain of being unable to “reach” far enough. This is the consequence of the hand and/or fingers attempting to move forward without the arm. Can you imagine reaching for an object six inches away moving only your wrist? Of course you would be understandably frustrated! Yet this is how many students try to “reach” for the notes forward extension. Have students try the following exercise to develop better habits for forward extensions.

Another error that students are prone to make is to extend forward without the thumb moving with the second finger (fig. 7).

I do hope that you work through these exercises and experiment on your own to find the extension technique that allows you the most mobility and the least tension. I have heard other excellent ways to explain extensions recently and am constantly seeking to add more ways of thinking about this universal concept. Please feel free to add a comment and share what has worked for you!