A Guide to the Cello/Organ Repertoire 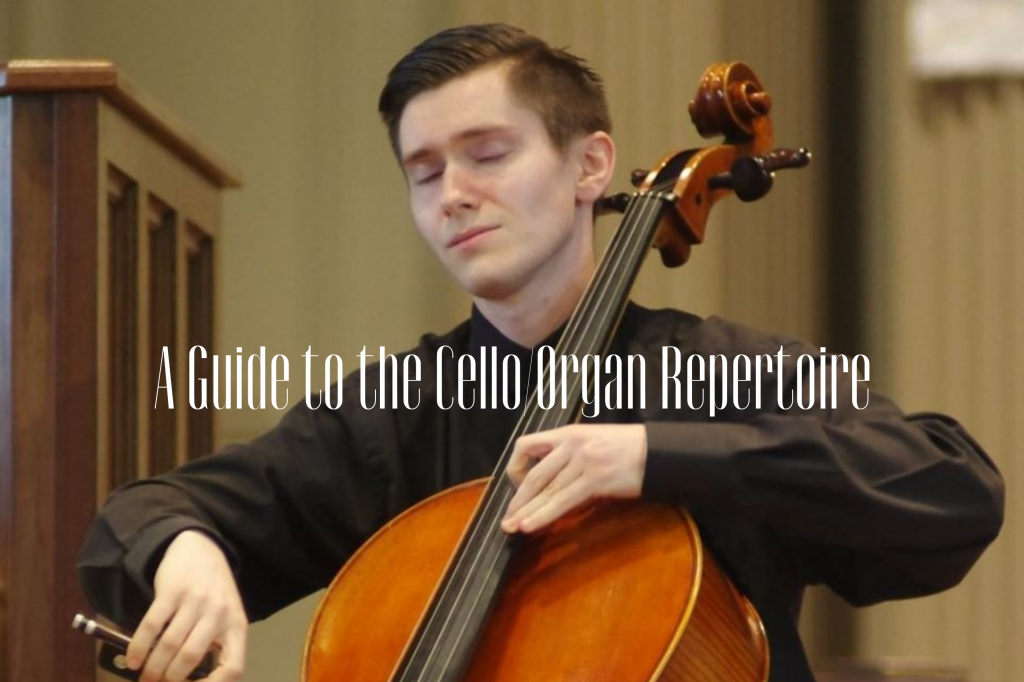 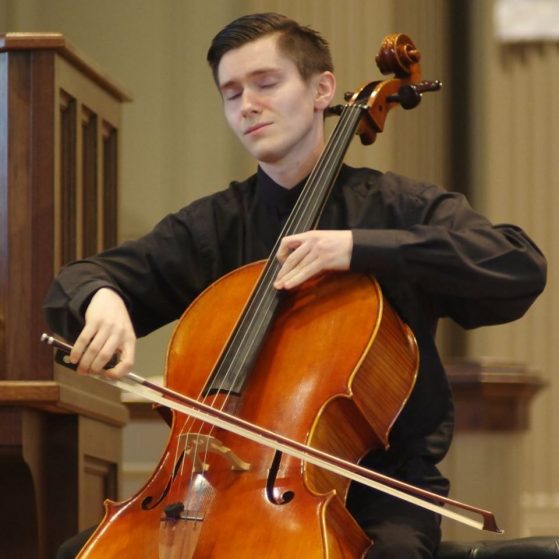 As a cellist, great chamber music partners are one of the many joys of life – strings, winds, and piano pair beautifully with the cello in many delightful combinations. However, one of the less often heard combinations is the cello/organ duo. As infrequently as these two instruments are heard as an ensemble, the duo boasts a surprisingly wide variety of compositions written for them. So often the organ is showcased as a solo instrument or relegated to an accompanimental role behind the choir that giving the king of instruments and equal footing with another instrument in a chamber music setting is a refreshing change of pace. In programming recitals, my search for repertoire proved that a comprehensive collection of repertoire for this duo has not yet been compiled. Here I hope to create this long overdue listing and share the gems of the repertoire, many of which I have already had the joy of performing in recital myself. Suggestions on where to purchase the sheet music for each piece will also be provided as well as a sample of the professional recordings available (or the lack of recordings when none exists). Many parts come as a piano score from which the organist will need to adapt. Although it is possible to transcribe works originally written for different instruments yourself, special emphasis is given here to those pieces originally written for cello and organ with a select few transcriptions. Many of the wonderful transcriptions have been omitted for sake of space.


In the Baroque era, nearly any sonata with basso continuo will transcribe nicely to a smaller organ or a portative. Two that work especially well are Antonio Vivaldi’s Cello Sonata in E Minor, RV 40, and Benedetto Marcello’s Cello Sonata No. 4 in G Minor. Both of these works are available on IMSLP, but if you prefer to purchase a physical copy and would like to give the organist a chance to realize the figured bass for themselves, facsimiles of the Vivaldi VI Sonates: Violoncello Solo col Basso can be purchased from Broude Brothers as well as many editions with realized bass including the Bärenreiter Urtext. The Vivaldi is a favorite standard in the cello repertoire, and many cellists will know it because of its inclusion in the Suzuki method books. The Marcello is not as well known to cellists, but it is nevertheless a wonderful sonata. The instruments exchange primary roles and echo and imitate each other making for good interplay. Physical copies of the parts are available from Edition Peters.

Transcriptions of Baroque violin sonata and individual movements of Baroque sonatas also work well for cello and organ. For example, J. S. Bach’s Sonata for Viola da gamba in G Major, BWV 1027 lends itself perfectly to this instrumentation and can be purchased from G. Henle Verlag. The haunting Largo from Francesco Maria Veracini’s Violin Sonata in D Minor also fits wonderfully on cello and organ. International Music Company offers the sheet music for both this movement alone as well as the complete sonata edited by Janos Starker. In addition to purely baroque music, another single movement Toccata once attributed to Girolamo Frescobaldi was later determined to be written by 20th century cellist-composer Gaspar Cassado, the work’s major proponent. One of the first Youtube search results yields a performance by none other than Mstislav Rostroprovich & Herbert Tachezi in a lighthearted performance of the work. A whole recording with these two performing this and several artful arrangements is offered by Teldec under the title Cello & Organ. The short and sprightly character of the work makes it fitting as an opener of a recital program. The parts are available from Universal Editions. 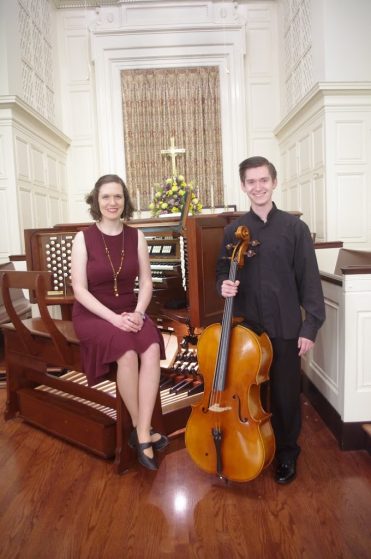 
Although the Classical era is sadly lacking in compositions for the cello/organ ensemble, the Romantic era more than makes up for the lack with an abundance of suitable repertoire. A set of works by Jewish Romantic composers has been compiled by Bärenreiter in a collection entitled Jewish Prayer. Perhaps the work best suited to these instruments is the familiar prayer Kol Nidrei by Max Bruch. To my ears, the organ admirably emulates the full orchestral score from the solo notes opening the piece to the harp solo and contrasting brass tuttis. Incidentally this piece will likely take the most effort to set fitting stops, but the end result will prove to be worth the effort. Other composers represented in the Jewish Prayer collection are Albert Kellermann, Friedrich Gernsheim, Joseph Sulzer, and Fernand Halphen. Among these, Halphen’s angelic Prière stands out as the most serene. Audiences often hold their applause for what seems to be an eternity after the final note, reluctant to break the tranquil silence.

Another work likewise entitled Prière by Camille Saint-Saëns contrasts with the Halphen in that it is longer and more varied in its emotional nuance so that it would not be redundant to program them together on a program or even back to back. In addition to Rostroprovich & Tachezi recording the Saint-Saëns Prière on the Cello & Organ recording mentioned previously, Steven Isserlis and Francis Grier have also professionally recorded the work. Parts are in the public domain and can be printed for free from many sites such as IMSLP as well as a cleaner edition through Stretta Music. In the vein of French composers, see also Gabriel Fauré’s single movement Andante. Although often heard with piano as the later version entitled Romance, the original version was written for cello and organ. You can hear Steven Isserlis perform this work with Francis Grier on the recording Fauré – Complete Cello Works on the RCA label. Sheet music is again available through IMSLP and in an Editions Peters collection entitled Fauré: Complete Shorter Works for Cello.


Lacking thus far has been organist composers in this list of works. However, that will be rectified in the next few works. First Marcel Dupré’s Sonata in A Minor for Cello and Organ, Op. 60. This three movement sonata was originally written for cello and organ so there is no need to do any arranging. One note regarding this piece is that it lacks a slow movement, all the tempos being in the Allegro category. This is perhaps the most often professionally recorded work for the duo with at least four commercially available recordings. Sheet music is available from Alfred Publishing Co.

If the Dupré sonata is the most recorded, the Oskar Wermann Sonata for Cello and Organ, Op. 58 is the least recorded with no professional recording of which I am aware. This three movement work does include a slow movement in the middle. To my knowledge, the music is out of print but is still available on IMSLP. Although not composed by a professional organist, a third sonata for the two instruments by 20th century composer Günter Raphael also deserves mention. I hesitate to bring up this work as performable because the music is out of print, but if you are willing to put the effort into finding the music, you will find it worth your while. Donald Moline and Randall Swanson have recorded the work on a recording collection entitled The Last Song of Summer, the title coming from a movement of a larger work described later. In contrast the Wermann, this sonata consists of two Largo movement surrounding a middle Vivace molto movement, so consider that it may not be effective as the final piece of a recital program. In addition to the sonatas, a single-movement work by an organist composer to be considered is Joseph Jongen’s Humoresque. Music is available both on IMSLP and through Castejon Music Editions. 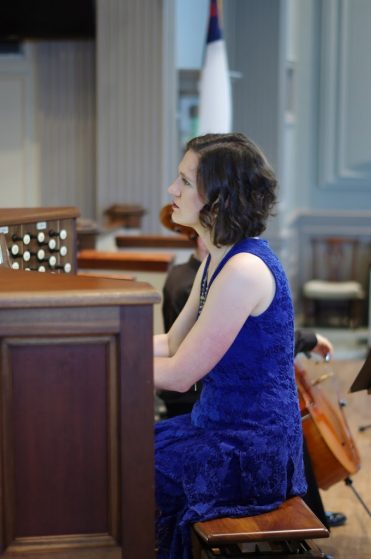 
Thankfully composers have continued to write for cello and organ to the present day. One such composer is Peter Mathews. His Four Seasons for Cello and Organ is fittingly varied and challenging. Though the four movement work as a whole tends toward flowing melodic lines and a very audience-accessible style, the dissonant Winter Lament movement contrasts with the rest of the piece such that it is, in the composer’s own words, “in a category all of its own in my writing.” MorningStar Publishers publish the music for the Matthews. Another work by a contemporary composer is Musique du Soir by Latvian composer Pēteris Vasks. This work perhaps out of all the afore-mentioned works allows this organ its moment of glory. When playing chamber music, it is my experience that the organist complains of feeling stifled because of the need to play soft enough to let the cello be heard. That need not be a concern in this piece because the composer gives the organ a grandiose solo in which there need be no concern of drowning out the cello which is resting. A mother-daughter duo of Sol Gabetta on cello and Irène Timacheff-Gabetta on organ can be heard performing this work on a recording of Vasks’s music entitled Presence. Alphonse Leduc publishes the music in France.

Many works suitable for the cello organ duo have been purposefully left off this list, for example works with electronics, modern works with extended techniques like Sofia Gubaidulina’s In Croce, arrangements of pieces such as the Albinoni Adagio and Respighi Adagio con variazioni, as well as chamber music with additional instruments. For sources of these and other works, see recordings by established performers such as the Syvati Duo which can be found here at this link. Also view the Wikipedia article on the subject. I’ve added some of the entries myself.


I hope this list is a help to you as you explore the world of chamber music in organ and cello. If you are familiar with additional works written for the ensemble that you feel should be added to this list, please list them in the comments below!